Review quotes from the 1st Edition 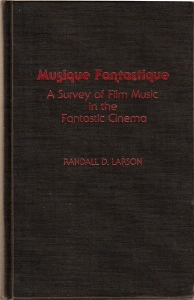 “The distinctive style of musical scores created for science fiction, horror, and fantasy films is expertly analyzed by Randall D. Larson in Musique Fantastique. This valuable reference work discusses the characteristics of this musical genre, its foremost composers, and specific films where the combination of the functional and the esthetic proves particularly successful.”
–George L. George, American Cinematographer, May 1985.
“This is an important basic work for the study of film musical scoring… Drawing from printed sources and interviews with film composers, [Larson] focuses on the music and musicians contributing to science fiction, horror, and fantasy movies since the late 1920s… This is a new area of academic interest, and Larson has done much here to provide fundamental information from which future scholarship can proceed.”
–J. F. MacDonald/Northeastern Illinois University, Choice, July 8, 1985

“Musique Fantastique can certainly be approached as a genre buff’s Grove Dictionary, but it’s more than just a detailed survey, it’s also a thorough and well-documented history of both a colorful genre of cinema and a well thought-out exploration and explanation of one specialized aspect of that genre’s potent and persistent impact, executed with the contagious enthusiasm of the fanatic buff and the attention to detail and documentation of the dedicated scholar.”
–Ross Care, Film Quarterly

“It is a relief to find that Larson writes for the fan rather than for the musicologist, which is hardly always the case in books of this nature. In little more than 360 pages, he gives countless examples of how the greats, past and present, have scored hundreds upon hundreds of films – some good, some outstanding, but always to the best of their ability, giving them that extra dimension… Randall Larson’s study deserves an asterisk as one of the five major works published on film music so far.”
–Luc Van de Ven, Soundtrack! The Collector’s Quarterly, June 1985.

“Larson is to be heartily congratulated for undertaking such a monstrous task in the first place, then producing what may very well be a classic book on a subject that has been constantly looked down upon musically and not taken seriously as such. This work demonstrated most vividly that the art of film scoring has a rich and varied history which has evolved into that which we of the now and all of the future can know of, observe, and enjoy thanks to the efforts of those such as Mr. Larson.”
–Don Archer, Steven Spielberg Film Society Newsletter, August 1987

“[Larson] has written absolutely the definitive book on film music in the fantasy film genre… The volume is far from a cold reference work as it contains interviews, analyses, and comparisons of styles between music masters which make this book fascinating reading.”
–Gary J. Svehla, Midnight Marquee, Fall 1985

“This is not a book addressed to musicians – although the subject may recommend it to them – and there are no musical examples give. The discussion of the music is in descriptive, verbal equivalents of the music, a difficult task at best. The most helpful commentaries are by the composers whom Larson cites generously in the text… in spite of its stylistic shortcomings, it is still a useful addition to the small list of books on film music and a sign of the growing interest in elements other than visual and narrative.”
–Walter Albert, Fantasy Review, Sept. 1985

“…it is refreshing to have a book on film music that the layman can pick up and enjoy without getting lost in technicalities. As someone who has no musical training and cannot even read music I can appreciate your approach.”
–Jeff Hall, Screen Sounds. Letter to the author, Sept. 17, 1985.

“… it is an excellent book written about a subject matter that has been greatly overlooked film music. It is the best book I have read on the subject since Bazelon’s Knowing the Score and a welcome addition and edition to those who truly love film music. Your research seems extensive and serves an excellent purpose… This book will be used as a wonderful reference work when film music is recognized as the great music it is.”
–Judy Hubbard, Steven Spielberg Film Society. Letter to the author, March 26, 1987.

“Here at last is a sublime and very complete reference work… This could have become a heavy academic volume, but Larson makes it a very readable and entertaining book as well… In this age, where a soundtrack often is no more than a random compilation of hit-singles, such a book is a breath of clean air. Absolutely recommended.”
–Eddy C. Bertin, SF-Gids [Belgium; SF Guide], February 1988

“…it can serve as an interesting, if somewhat limited, introduction to film music in general. Because of its impressive ‘completeness,’ it can be used by film music students as a handy reference source of general information and specific film composing credits. More significantly, Musique Fantastique contains a wealth of new or previously unpublished information, including numerous, if brief, discussions of lesser-known screen composers and informative extracts from Larson’s interviews with composers.”
–Fred Steiner, Institute for Studies in American Music Newsletter, May 1987