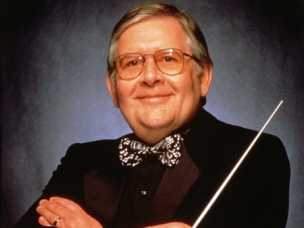 Two-time Emmy winner Alf Clausen has been fired from THE SIMPSONS after 27 years of providing music for Homer, Bart, Lisa, and company.

Clausen told Variety that he received a call from SIMPSONS producer Richard Sakai that the company was seeking “a different kind of music” and that he would no longer be scoring the longtime Fox hit.

The loss is tremendous, wrote Fuller. Clausen might not be the man behind the show’s legendary theme song (that is, of course, Danny Elfman), but his impact on the show’s music is second to none. Not only has he scored every scene since 1990, he has also provided the music for the show’s beloved songs since season five. Clausen‘s Emmy record includes two wins (1997 and ’98) and another 21 nominations for THE SIMPSONS dating back to 1992. He’s scored more than 560 episodes of the series, starting early in the 1990-91 season. He is believed to be the most-nominated composer in Emmy history, with a total of 30 nominations overall.

Clausen’s SIMPSONS music has also won five Annie Awards. His long tenure with the series has made him one of the most respected creators of animation music in TV history. Clausen, who worked for many years as a composer before THE SIMPSONS, had a real gift for big, old-school show tunes and parodying music while still making it different enough that it would be fair use, said Fuller. It’s why Matt Groening has long called him the show’s “secret weapon.”

Speculation about Clausen’s dismissal involves cost-cutting measures, which have been ongoing at THE SIMPSONS in recent years, despite its massive profits for Fox and executive producer James L. Brooks’ Gracie Films.  Burlingame reported that a Fox spokeswoman declined to comment.

“They Have Effectively Killed A Character in the Show”

“The traction the Alf Clauson/Simpson’s story is seeing in the media is a kind of exposure one would not typically expect for a ‘composer,’ wrote film composer Brian Ralston in a Facebook post this morning.  “But Alf is not just any composer and THE SIMPSONS is a show beloved by so many. The outcry and articles being written even in unexpected places like Slate, USA Today, BBC, Rolling Stone, NY Times, Business Standard, trade publications like Variety and Hollywood Reporter, entertainment weekly, smaller but powerful columns like AV Club, Home Theater Forum and even tech publications IGN, Mashable, Tech Investor News…all indicate to me this is a widespread blowback the decision makers at Fox were likely not fully expecting. They have effectively killed a character in the show. One subconsciously loved by all – and one the show’s success was built on. And they have thrown it out like yesterday’s news. I think this will truly be a case of never knowing what you had until it’s gone. And boy are they going to miss it.”

Clausen’s last complete score for the series was for the Season 28 finale, which aired in May, noted Burlingame. The 29th Season premiere is slated for Oct. 1, but there’s been no word yet on who will be scoring that episode.

Based on articles  posted by Jon Burlingame  in Variety 8/30/17
and an article by Jesse David Fox posted at The Vulture.com on August 30, 2017. Text of Facebook post by Brian Ralston used with his permission.