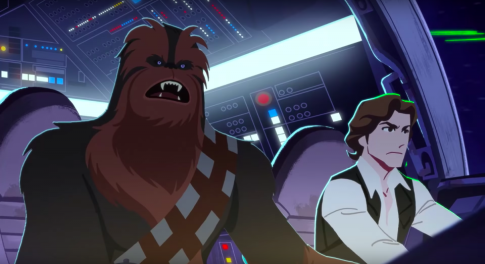 Scene from STAR WARS GALAXY OF ADVENTURES (via Forbes)

In honor of STAR WARS Day, Forbes has posted an online interview with composer Ryan Shore, who is currently scoring STAR WARS GALAXY OF ADVENTURES, a new series of 2D animated Disney shorts set in the Star Wars world, which follows on Shore’s music for the web series FORCES OF DESTINY series (2017-2018). Shore is also scoring a follow-up series GALAXY OF ADVENTURES: FUN FACTS.

Confused? Here’s how Shore explained it to Josh Weiss of Forbes: “For STAR WARS: FORCES OF DESTINY, everything I composed was an original new score, and I was able to quote John Williams’ themes. All of the scoring heard between John Williams’ themes and the music that supports those themes I composed originally. For STAR WARS: GALAXY OF ADVENTURES, we’re often recreating iconic scenes from the original films.  The original dialogue and sound effects from the films are often utilized, and similarly, we also try to include sections of John Williams’ original score recordings from the films. However, even though we’re recreating many scenes, we don’t always tell them in the exact same way shot-for-shot… I’ll compose my own music to dovetail in and out of John Williams’ music to create one continuous score.”

GALAXY OF ADVENTURES FUN FACTS is an adjacent series to STAR WARS: GALAXY OF ADVENTURES. “Each series is focused on inviting new audiences into the Star Wars universe…  The music in the main series proper is very much based on John Williams’ original music from the films and the sound of the score is entirely orchestral, whereas the score for FUN FACTS is entirely electronic and contemporary.”