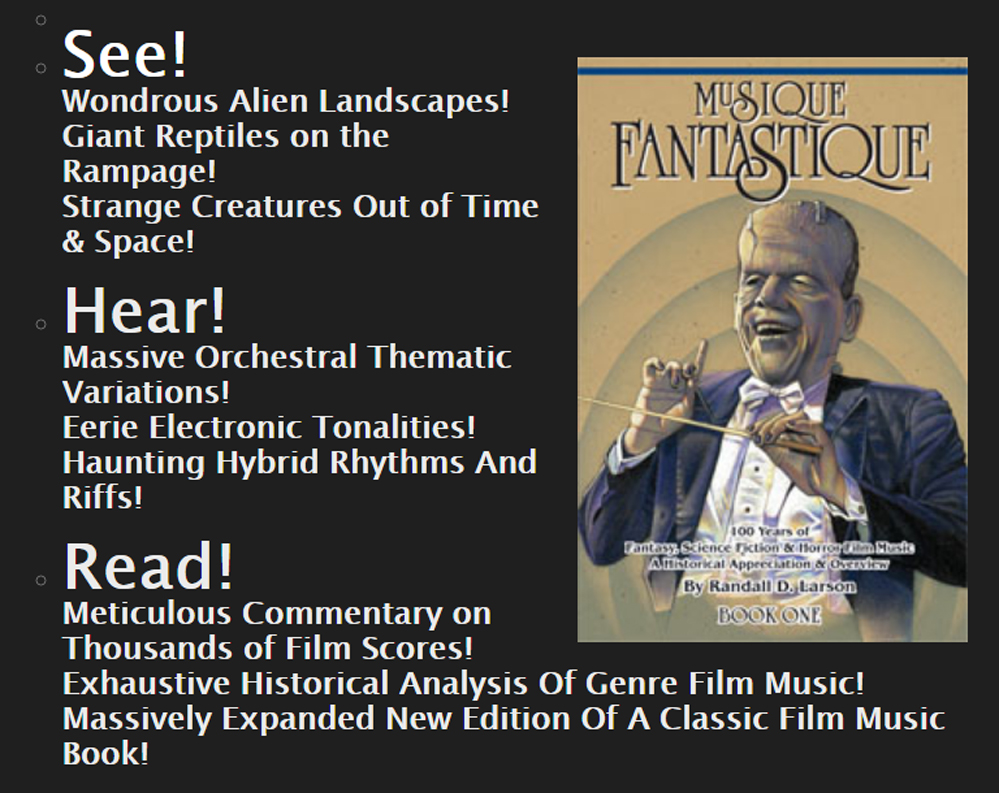 Musique Fantastique, Second Edition
100+ Years of Fantasy, Science Fiction & Horror Film Music
By Randall D. Larson
Music for science fiction, fantasy, and horror films has always been a particularly unique area of film scoring. Just as fantasy has allowed the minds of writ­ers and filmmakers to flow into new and unexplored regions, so has it allowed the imaginations of film composers to create much of the finest music composed for motion pictures. In 1985, Randall D. Larson’s Musique Fantastique was the first book-length analytical commentary of these genres of film music. In this new edition, Larson has thoroughly rewritten and expanded that book into a massive comprehensive examination of music for fantasy, sci-fi, and horror films and television, from the silents through the summer blockbusters of 2019 – intricately detailed and wide-ranging in its scope. The first Book in the Second Edition series was published in 2012 by Creature Features. Remaining books in the series will be published beginning in 2020 by Midnight Marquee Press. See details elsewhere on this site.
“I would like to thank Randall on behalf of the entire music community for his years of commitment to promoting film music and the film composers that write it. Most importantly, he has always done it entirely out of true love of music and what it can do in these kinds of films.  It’s been this passion for genre music that prompted [this] analysis and commentary.” – from the Introduction by Christopher Young.

“The full four-volume work bodes to be of major importance, but this first volume already constitutes a most impressive overview of the genre’s most seminal period.  Whether read straight through or dipped into as desired, MUSIQUE FANTASTIQUE earns its place in every fantastic film library by fleshing out the lives, careers, and works of dozens of key contributors who lent glory to the genre’s most iconic years and images, many of whom have never rated mention even in its most comprehensive histories.”
–Tim Lucas/Video Watchdog #177

This book is about the power of imagination – the quest of writers and filmmakers to imagine new realities and break new ground, and the efforts of composers to provide a soundtrack for these explorations. Randall Larson has written a remarkable and passionately researched account of these musical efforts. It should be a fascinating read for anyone interested in film, as it provides an endless source of insight and inspiration for people working in the field. I thoroughly enjoyed reading this book and can’t wait for the subsequent volumes to be published.
–Paul Haslinger, composer

This book is just great! In its musical and historical aspects, it is a must for very film music lover and composer – and should be also a must reading for producers and directors!
–Elia Cmiral, composer

I grew up on these films, and yet still found revealing insights on every page about my favorite composers and scores. Best of all, Larson is careful not to let the detail overwhelm the reader — “Musique Fantastique” is a brisk and fun read. There’s something here for everyone, from the casual fan, to aspiring musicians, to film buffs, to veteran composers. You’ll never watch (or listen to) your favorite genre films the same way again!
–Bear McCreary, composer

When I was first learning about the wealth of fabulous music written for fantastic films of the past, the first edition of Randall Larson’s “Musique Fantastique” was my number one reference source.  Long after I forged my own niche in the field of such music as a soundtrack producer and writer, “Musique Fantastique” remained the most essential film music volume on my bookshelf.  As impressively one-of-a-kind as that initial edition was, this greatly-expanded and revised second edition redefines “comprehensive” regarding this remarkable and important genre of music, and for many generations to come it will no doubt entertain and illuminate even more than its predecessor did.  And I shall be returning to it again and again long into the fantastic future.
–David Schecter, soundtrack producer

It turns out I don’t know everything about film music (I thought I did), but Randall Larson seemingly does. He not only shows an encyclopedic knowledge of the many composers involved in writing music for horror and fantasy films (not just the famous ones), but he also gives us a feeling of the studios, the music departments, and the music supervisors whose job it was to put music on the huge amount of films that were being made at the time. Larson also has a knack for being able to describe music with words… I could hear the deep strings, the bells and timps, and the wow of the Theremin. “Musique Fantastique” is a book for anyone with a deep love of film music.
–Craig Safan, composer

This book is an amazing feat!  To condense the naturally elusive realm of the history of genre film scoring into an intelligible, tangible overview not only is an invaluable tool for composers, but sheds light on the culture of society as a whole.  Music is one of the best mirrors of the emotional state of the times in which it was produced and this book gives an insight into an area that has long been overlooked.  This book then, serves both as a specific resource manual for those interested in researching a favorite score or composer, as well as a colorful linear narrative, the likes of which I have not seen before.  Well done Randall!
–Marco Beltrami, composer

BOOK ONE available from Creature Features.

Volume 1: Beginnings And The First Golden Age (1900-1959)
The Sound of the Silents
The Universal Monster Music Factory
Fantasies of the ‘30s & ‘40s
Sci-Fi Films of the ‘50s
The Monster Music of Japan
Music for Television, Part 1
Individual Chapters on: Miklós Rózsa, Roy Webb, Dimitri Tiomkin