“This is a veritable bible for fans of film music, a chronicle of the evolution of the art since the very first horror scores. Larson is perhaps the leading authority on the subject and every page has several useful quotes from the composers or from reviews written when the movies first came out. It is an easy, delightful and informative read that is over way too soon.   If I were to nitpick, I would say that his style is the polar opposite of that of some French or Spanish writers on film music. I cannot recall a single instance where Larson lets out a negative review of a score, even when the effort may be poorly conceived or laugh out loud bad. His book is not meant as a critique of the music. It reads as a celebration of the work of the composers and is written with the utmost respect. Perhaps a little too much for its own sake: once or twice I could sense that the author was holding back his true feelings about a dismal score. But the positive attitude is nice for a change and one can indeed feel Larson’s passion about all the aspects of the music.”

“This book approaches its sizeable subject from the standpoint of composer, rather than offering a more scattershot title-by-title account.  This way, Larson presents us with the composer as auteur, showing how different assignments stretched some composers’ talent while others became imprisoned by welcoming too little variety into their resumes. His discussions (which frequently include quotes from interviews) are critical but fair and rich in essential detail – we’re told, for example, that William Lava was responsible for the main monster themes of the Universal scores he co-wrote with Henry Mancini and others, and when music written for RETURN OF THE VAMPIRE turns up as stock music in CRY OF THE WEREWOLF-and Larson excels at identifying instrumentation and transmuting a variety of musical styles into kindred verbiage…

“The full four-volume work bodes to be of major importance, but this first volume already constitutes a most impressive overview of the genre’s most seminal period. Whether read straight through or dipped into as desired, MUSIQUE FANTASTIQUE earns its place in every fantastic film library by fleshing out the lives, careers, and works of dozens of key contributors who lent glory to the genre’s most iconic years and images, many of whom have never rated mention even in its most comprehensive histories.”

“The amount of effort and research that went into Musique Fantastique is incredible.  Page after page is packed with a bounty of fascinating information – far more than I would have ever imagined… Larson deserves a wealth of praise, his writing is accessible and never bogs the reader down with technical musical jargon that would fly over the average layman’s head…  I simply cannot recommend Musique Fantastique enough.  It exceeded by every expectation and deepened my admiration for film scoring and the music of horror, sci-fi, and fantasy cinema.”

From Martin Arlt’s review in Mad Scientist magazine #26 (Feb, 2013):
“Detailed biographies provide ample background on composers from well-known masters… to lesser-known journeymen who earned a living on B- and C-list pictures.  In addition, considerable information is provided on the creative choices these artists made while scoring various films and TV shows, covering everything from instrument choices to the mood they were trying to convey…  Musique Fantastique does for genre film music what Bill Warren’s Keep Watching the Skies did for the films themselves.  It’s truly a work that belongs on every film fan’s bookshelf.”

Amazon.com Reader Review by John M. Navroth/MonsterMagazineWorld.com (Jan 27, 2013):
What a fabulous book — and it’s only the first of several volumes! The introduction articulately establishes the book in context with its intent and historical significance. Many of the original scores, including those of the classic Universal monster films, are long gone, but with the help of this book, anyone can relive the creation of some of the most memorable film scores of all time.
The book is well-produced and attractive. Bill Nelson’s cover illustration is quite appropriate for the theme of the first volume. I applaud Mr. Larson’s attention to detail and his writing is very readable. Any Monster Kid or other soundtrack enthusiast remotely interested in the rich and lasting legacy of horror, fantasy, and science-fiction soundtracks will not be disappointed in this book . . . unless, that is, you’re tone deaf. 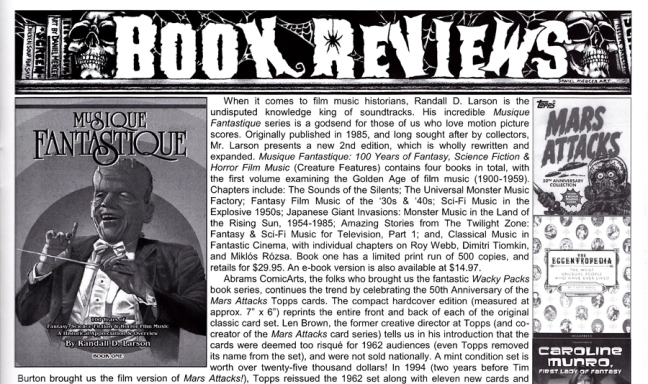 From Darryl Mayeski’s review published in SCREEM Magazine #25 (Nov 2012):
When it comes to film music historians, Randall D. Larson is the undisputed knowledge king of soundtracks.  His incredible Musique Fantastique series is a godsend for those of us who love motion picture scores.  Originally published in 1985 and long sought after by collectors, Mr. Larson presents a new 2nd edition, which is wholly rewritten and expanded.  Musique Fantastique: 100 Years of Fantasy, Science Fiction & Horror Film Music (Creature Features) contains four books in total, with the first volume examining the Golden Age of film music (1900-1959).

From Andy Dursin’s “Aisle Seat” for Oct 9, 2012:
Randall Larson’s indispensable 1985 examination of sci-fi/fantasy/horror music has been published in a brand-new edition from Creature Features.  Book one, now available in a limited-edition, trade-paperback run of 500 copies (as well as in ebook form), takes readers through the origins of genre music in silent films, ‘30s and ‘40s fantasies, to Franz Waxman’s benchmark score in “The Bride of Frankenstein” and Max Steiner’s “King Kong.” Scores for Japanese classics like “Godzilla,” the work of composers Bernard Herrmann and Jerry Goldsmith in “The Twilight Zone,” soundtracks composed for some of the ‘50s monster mashes, and full chapters on Dimitri Tiomkin, Roy Webb and Miklos Rozsa are all examined here with Larson’s expert commentary provided throughout.
– http://www.andyfilm.com/10-9-12.html

From Cédric Delelée’s review published in French genre film magazine, MAD MOVIES, Sept 2012 (translated from French):
One thousand and seven hundred pages: that’s what will be printed for this updated edition of Musique Fantastique once its four volumes will be completed. In other terms, it is the most exhaustive and captivating study devoted to “Mad” Movies ever, from the silent era to nowadays. King Kong, The Bride of Frankenstein, the Universal Horror Classics, the Golden Age, Miklos Rozsa’s fantasy scores, Roy Webb, SF B-movies of the 50’s, television scoring (Irwin Allen, Star Trek, Twilight Zone, Battlestar Galactica, Amazing Stories…), the use of classical music in Kubrick’s films… This 1st volume gives enough information and analysis to wait for the next ones, which will feature Bernard Herrmann, Italian B-movies, Jerry Goldsmith, John Williams and the glorious eighties, among many other subjects.
– http://www.mad-movies.com/

Steve Vertlieb’s review of MF II from American Music Preservation has been republished by “mfiles” in the u.k. at this link:
http://www.mfiles.co.uk/reviews/musique-fantastique-book1-by-randall-larson.htm

Steve Vertlieb reviews Book One for American Music Preservation in a lengthy and exploratory review.   Here are two excerpts:
Few writers have attempted to define or explore the marvelous mystique of scoring for fantastic films. At the forefront of this modest community has been Randall Larson, a passionate champion of film composers and their artistry for some forty years. Film and theater critics have endured a long, unhealthy tradition of unfairly and, often, maliciously criticizing films outside the respectable main stream of motion picture production. Composers writing music for this so-called, sub-genre have rarely been accorded honor or reward by either their critics or peers. Entertainment Tonight’s Leonard Maltin, to his enduring credit, has represented the “everyman” in his many years of motion picture journalism. If there is a comparable writer specializing in the often maligned field of music for motion pictures, it would almost have to be Randall Larson, a humble “everyman” whose often remarkable journalism and prose regarding music for the movies has distinguished itself over these many years as eloquent, poetic, and profound.

It is poignant testimony to the value and significance of music for the movies and, with this volume by Randall Larson, an important addition to a growing library of influential work on an all too often neglected art form.
– http://www.americanmusicpreservation.com/MusiqueFantastique%28bookreview%29.htm

Daniel Schweiger reviews Book One for Film Music Magazine online:
For the last several decades, Randall D. Larson has been one of the preeminent soundtrack journalists for such magazines as Soundtrack and Cinefantastique, let alone one of the most readable writers in the craft. Larson’s strength has been explaining his appreciation of all genres of movie music in a way that’s approachable for fans without sounding like an academic dissertations for the cultural elite. Larson’s found not only time to review and cover just about every album and their composer, but to also write a few books on the side, the most essential of which now gets turned from one volume into a four-book series that’s likely to stand as the “Lord of the Rings” of score appreciation. First up is “Musique Fantastique.” First published in 1985, “Fantastique” has been re-worked to become the 500-page alpha in the omega of Larson’s thoroughly entertaining and informative 1700 page epic, the material come alive again in Creature Features’ presentation (complete with charming monster-conducting art by Bill Nelson). Covering silent movies like “Metropolis” and “The Hunchback of Notre Dame” to the songs of “The Muppets Take Manhattan” and “Day of the Dead’s” synth calypso, the author also hits such TV chestnuts as “Captain Scarlett” and “Star Trek,” with all points in between. Larson lucidly covers the scores as he breaks down their creators’ careers, giving a global ear as to how horror, sci-fi and fantasy stylings have evolved from orchestral to electronic expression, all with an enthusiasm and knowledge that’s remained unabated for the author.
– http://www.filmmusicmag.com/?p=10020
(posted with permission of the author.)