While interviewing Emmy-, Golden Globe-, and BAFTA-nominated composer Harry-Gregson Williams about his scores for Disneynature’s PENGUINS and Hulu’s CATCH-22 for my Soundtrax column, I took a few minutes to ask about his experiences on scoring last year’s giant shark thriller, THE MEG, for Musique Fantastique. THE MEG, released by Warner Bros. during the same week that SyFy released its week-long (and far less-costly) armada of festive shark horrors like THE LAST SHARKNADO, 6-HEADED SHARK ATTACK, and their own MEGALODON, is about a prehistoric Megalodon shark attacking coastal communities in the South Pacific. Gregson-Williams provided MEG with melodic and menacing orchestral score, as discussed below. -rdl

Q: I wanted to ask you briefly about a guilty pleasure of mine, which is THE MEG – and I must confess I have a fondness for films of the Mega-this and Giant-whatsis terrorizing humankind cinema. I believe this was your first monster movie score. Where did you start in crafting your score for MEG? 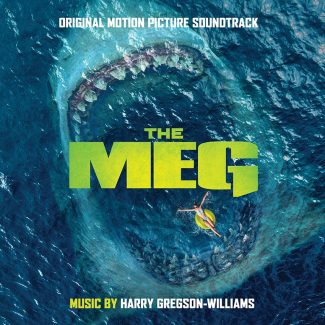 Harry-Gregson-Williams: When I first met John Turteltaub, the director, in his cutting room to discuss the music, one of the first things he said was “I don’t think we need much music in this.” I said. “What? Really?” But Ben Affleck had said the same thing to me on GONE BABY GONE when I met him on the first film that he directed, and we ended up with about an hour of music and, similarly, we must have ended up with about 85 minutes of music in THE MEG! So, yeah, a monster movie needs music!

But where did I start? It wasn’t with the shark – because when I started work on it there was no shark! It was water moving, it was bubbles, and it was a certain amount of blood coming out of places, but there was no shark yet. So I actually started with a theme for the hero of the story and a theme for the Chinese family. As I began working on the score, weeks turned into months and they would turn over bits of the film to me, and then one day, Hello! There’s a shark in that scene now! So gradually the visual effects people caught up to us. But that was a hoot to do that movie. You’re right, I’ve never anything like that before, and it was a very different assignment from scoring PENGUINS! The amount of sound effects that I had to contend with was a lot! It turned out the director was pretty keen on having his sound effects throughout the movie, so the score had some difficulty finding its place.

Q: Despite the large difference in size, does scoring a shark film always bring the sonic baggage of JAWS with it? Was it a challenge to develop a shark movie score that doesn’t accidentally reflect that influence?

Harry-Gregson-Williams: Are you kidding me?! That’s the most recognizable movie theme of the 20th Century, and half of my name is Williams, too! So, yeah – I actually thought about not taking on this assignment for that very reason, but John Turteltaub did assure me; he said “We’re not making JAWS here. This is not trying to be JAWS at all. Having said that, go away and write a theme as good as JAWS and we’ll all be very happy!” So, what can I say? I definitely avoided low cellos and basses in my score!

THE SCORING SESSION FOR THE MEG. PHOTO BY HEINZ ZEGGL/SYNCHRON STAGE, VIENNA

Q: Sometimes these movies challenge the suspension of disbelief of an audience. How did your create a score that would help make the circumstances of the film and its titular creature credible to the audience?

Harry-Gregson-Williams: Mainly by focusing on the characters involved. The Meg itself was one thing, but the score had to be very, very concerned with the lead characters in this movie, the humans, in order to enhance the danger of the giant shark.

Special thanks to Jeff Sanderson of Chasen & Company PR for facilitating this interview, and to Dan Goldwasser and Martin Tichy for assistance in acquiring the recording studio images. For more photos of THE MEG’s session, see scoringsessions.com

Harry Gregson-Williams’ soundtrack to THE MEG was released digitally by WaterTower Music. Listen to the album’s finale,“To Our Friends” below: