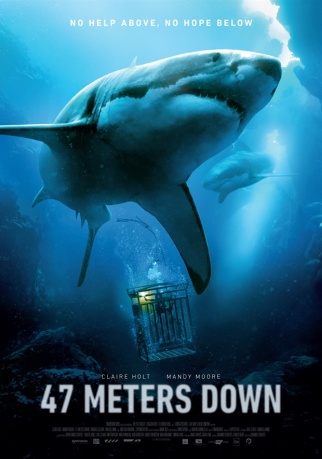 Lakeshore Records will release tomandandy’s latest horror score, 47 Meters Down, digitally on July 28, 2017. The 2017 film, directed by Johannes Roberts (STORAGE 24, F, DARKHUNTERS), is a gripping thriller about two sisters vacationing in Mexico who agree to take a shark-diving excursion. Lowered into the ocean depths, the cable suspending their shark cage suddenly snaps and plummets 47 meters (more than 150 feet) down to the seabed. To their horror, the sisters discover they are too deep to radio for help without leaving the cage and making themselves vulnerable to the voracious sharks, and a rapid ascent would lead to the potentially deadly condition known as the bends. With their oxygen supplies rapidly dwindling, the girls do everything in their power to get to safety, even as a series of calamitous events makes it increasingly likely they won’t escape their underwater prison alive.

“Johannes [Roberts, director] had a very clear vision from the beginning,” said Tom Hadju (the Tom of the tomandandy duo). “He wanted the score to be savage and raw — violent even. He really encouraged us to take extreme measures.” Andy Milburn (the Andy of the duo) added that when composing for the film, “we started with the snapping of the cable and fall to the ocean floor. We wanted to develop the colors of the score, and that scene needed all of them. It was really the crucible in which we could find just how noisy and crazy and brutal we could get.” 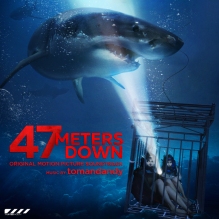 “The music for 47 METERS DOWN is a score with teeth, and lots of sonic texture,” writes Randall D. Larson of MusiqueFantastique.com. “With the duo’s characteristic style of synthetic musical sound design and layered depth of musical grain, the score within and apart from the film develops a palpable sense of apprehension and danger, as rough-edged as the sandpaper-like skin of the prowling Great Whites and as sharp and multilayered as the rows of jagged-edged teeth within the fish’s ice cold grin. Solidified by relentless percussive patterns, the music really amps up the film’s inherent scare-factor as it glides in and grasps the listener; only at the end does the music ease back and offer the relief of liberating respite.”

“Right from the opening credits, the band [tomandandy] turns water into something alien, secret and lethal, bathing our ears with grinding, post-industrial dread,” wrote Chris Alexander at comingsoon.net.  “It’s a magnificent and moody tapestry of sound that helps anchor the movie in a consistent, often unbearably intense feeling of unease.”

Born in 1990s’ New York City, tomandandy has long been a mysterious and subversive force in music for media. tomandandy has created original music for feature films by Academy Award®-winning filmmakers, including Oliver Stone and Roger Avary; produced music with recording artists, among them Lou Reed and David Byrne; and collaborated with such artists as author William Burroughs, performance artist Laurie Anderson and visual artist Jenny Holzer. Their recent credits include scores for RESIDENT EVIL: RETRIBUTION, SINISTER 2, THE MONSTER and the recently released WISH UPON.