The 2012 anthology film THE ABCs OF DEATH, challenged 26 international filmmakers to create 26 short films, each one based on a word beginning with a chosen or designated letter of the alphabet, and each on having something to do with death.  The completed movie resulted in a kind of massive anthology film, with each “chapter” segment averaging about four minutes in length.  The concept was stimulating enough to warrant a sequel, THE ABCs OF DEATH 2, released in 2014.

In both films, each chapter was scored by a different composer, since each miniature movie of mayhem was made by itself with its own cast and crew. The first film’s main title sequence did not credit a composer, and was primarily a creepy sound design collage. For the sequel, the filmmaker/composer duo of Andre Roessler and Isabel Greiwe created a unique piece of signature music that is heard over the film’s main titles and used as interstitial music in the title cards announcing each new alphabetical chapter. The music, which they titled “Till We All Die,” is a harsh, savage, dying lullaby that perfectly matches the deliciously morbid title images and tone of the project as a whole. It’s grimy and grotesque and utterly engrossing in its effectiveness.

I recently interviewed Andre and Isabel about their music and their creation of THE ABCs OF DEATH 2 title music, “Till We All Die.”

Watch THE ABCs OF DEATH 2 MainTitle sequence on YouTube here

Q: Andre, you have been involved in many aspects of creating commercials, music videos, documentaries – how did you become involved with filmmaking?

Andre Roessler: It happened by accident! After I finished school I had no clue what to do with my life beside music and movies, and I went through many different jobs. I was working in a video store, gas station, as a barkeeper, personal trainer, and I was playing music in pubs. One day a friend of mine told me about a new 3-year-job-training opportunity as a “digital media designer,” which he could help me get started in. So I began this training and through that I got in touch with the TV industry.

Q: What are your musical backgrounds and how did you begin working together?

Andre Roessler: That’s a funny story – one night in 2004 we both went to a karaoke night at an Irish pub. We didn’t know each other at that time. The karaoke machine was broken so there was a guy with a guitar and he asked if someone would like to play a song – which Isabel did.  When she was playing it, I was absolutely amazed. I was singing as well and later that evening I asked her if she would like to start an acoustic singer-songwriter project with me. That was the beginning of our singer-songwriter duo “Little Heroes.”

Now 11 years later we are happily married and still making music together. 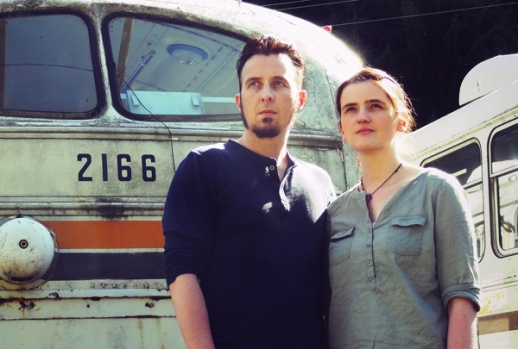 Q: Andre, how did you and Isabel become involved in writing the title music for ABCs of Death 2?

Andre Roessler: There was a filmmaking competition called “Done in 60 seconds” run by British Empire magazine. It’s a crazy and funny contest in which participants recreate a famous film in 60 seconds. We made it into the German final with our weird version of THE WRESTLER. There we met Wolfgang Matzl an Austrian paper cutout animation artist. Neither of us won but we became friends and I asked him to do an opening title animation for a longtime project of me – a Documentary called KRAFTAKT about the Strongman sport with Lou Ferrigno (THE INCREDIBLE HULK). I had no producers or sponsors on board for the documentary so Isabel and I had to write the music by ourselves. That was the first time we recognized that we could write instrumental music beside our singer-songwriter material. A few months later Wolfgang Matzl was asked to do an opening title Animation for THE ABCS OF DEATH 2 by the producer of the movie Ant Timpson, so he asked us if we could try to compose the music for his animation.

Q: What were the initial discussions the two of you had with the film producers about the kind of title music they were looking for – and how did you come up with the concept of the “corrupt lullaby” develop during this process?

Andre Roessler: To be honest we didn’t have any discussions with the producers. Wolfgang Matzl was our only contact during the whole process. He sent us his visual concept and asked if we could write and record demo versions of two different songs for the opening titles. After the producer Ant Timpson got the final version of the animation he sent me an email and said that he loved our work. After the world premiere of the movie, the actor Elijah Wood, who attended the premiere, wrote about our song “What is this song?! Most twisted lullaby ever!” It was great to hear that our little tune left a mark in Hollywood!

Q: How did you work together to develop the idea into the final mix?

Andre Roessler: I am a huge fan of scary horror movie scores so I was thinking about the possibility of catching the spirit of cult movie scores like Krzysztof Komeda’s ROSEMARY’S BABY or the SUSPIRIA Theme by Goblin. Finally Isabel got the idea to do some tests with a toy piano to create a mixture between innocence and creepiness. So I bought a cheap toy piano plug-in for my recording software and after a few hours we got the piano riff and the “scary girl” melody.

Q: Did you work with the visuals of the main/end title sequences as you created your music or not?

Andre Roessler: First we started with a few rough sketches from Wolfgang to get an idea how it could look like. A few weeks later he sent us an early demo animation – less bloody and scary then the final version but perfect to do the final touches of our theme song “Till we all die.”

Q: Isabel, would you describe your process of singing the lullaby voice and how you made it sound so creepy?

Isabel Roessler (Greiwe): There are two vocal tracks in the song, first a very clear and melodic one for the innocent parts of the title animation. We then added a second track where I whispered the tune without really singing the melody. To me whispering is one of the creepiest sounds anyway but what I had in mind when I created that whisper was actually an evil gremlin “singing along” to the melody while sitting in a closet right behind you (or in the back of your head?).

Q: Did you do any other music for this show?

Andre Roessler: No sadly not – but I would love to do it again.

Q: Any other comments or recollections you would like to share about your experiences creating this music?

Andre Roessler: Some people asked us if it was disturbing or frightening to write the music for a creepy animation where children were killed and other bloody stuff happened. No it was not – it was so much fun! We wrote the music without any cruel pictures in our minds, because we hadn‘t seen the final animation when we wrote the tune. We were jamming with a toy piano, an out-of-tune autoharp, and Isabel’s singing with this scratchy voice. It was a great experience and we are thankful and proud to be part of such an exciting movie like ABCs OF DEATH 2.

Buy the “Till We All Die” EP on iTunes here