“How Many More Spider-People Are There?”

Sony Drops New Trailer for SPIDER-MAN: INTO THE SPIDERVERSE And It’s a Hoot!

This new trailer for SPIDER-MAN: INTO THE SPIDERVERSE was released today (watch it below) and it’s quite a fun (and funny) watch, apart from being a cool preview of the upcoming computer-animated feature film. Directed by Bob Persichetti, Peter Ramsey, and Rodney Rothman, the movie stars Shameik Moore as Morales alongside Hailee Steinfeld, Mahershala Ali, Jake Johnson, Liev Schreiber, Brian Tyree Henry, Luna Lauren Velez, and Lily Tomlin. 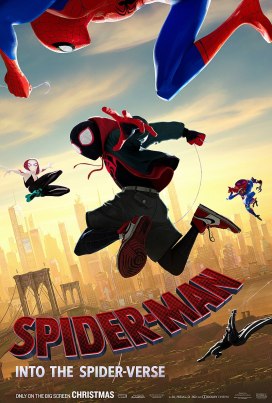 The movie is based on the Miles Morales iteration of Spider-Man from Marvel Comics. The story is set in an alternate universe from Sony’s other Spider-Man properties, but introduces a shared multiverse, in which Spider-Man crosses parallel dimensions and teams up with the Spider-Men of those dimensions to stop a threat to all reality. Thinking you are the only Spider-Man and suddenly discovering there are a whole bunch of Spider-Man (and Women) serving these alternate universes can be quite a shock. That’s the fish-out-of-water premise of INTO THE SPIDERVERSE, which opens into a delicious action film combining in-house computer animation by Sony’s Imageworks with traditional hand-drawn techniques inspired by the work of Miles Morales’s co-creator Sara Pichelli.

Critically-acclaimed composer Daniel Pemberton is scoring the movie. In little more than five years, Pemberton was named “Discovery of The Year” at the World Soundtrack Awards, collaborated with iconic filmmakers including Danny Boyle, Ridley Scott, Stephen Gaghan, and Aaron Sorkin, and received Golden Globe and BAFTA nominations. Pemberton’s credits so far include OCEANS 8 (2018), STEVE JOBS (2015), THE MAN FROM U.N.C.L.E. (2015), KING ARTHUR: LEGEND OF THE SWORD (2017), GOLD (2016), ALL THE MONEY IN THE WORLD (2017), and MOLLY’S GAME (2017).