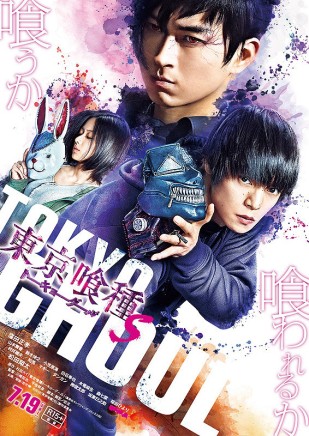 Japanese composers Naruyoshi Kikuchi (MOBILE SUIT GUNDAM THUNDERBOLT: BANDIT FLOWER) and newcomer Tomomi Oda are scoring the cannibalistic TOKYO GHOUL S, the sequel to Kentarô Hagiwara’s 2017 manga/anime-based live-action horror film TOKYO GHOUL (which was scored stateside by Don Davis; interviewed, by the way, about it here).  The film is directed by Kazuhiko Hiramaki and Takuya Kawasaki (both first-time directors), and features a number of cast members from the first movie returning in the same roles.

Originally created by Sui Ishida for Shueisha’s Weekly Young Jump in 2011, Tokyo Ghoul is set in a world full of ghouls, creatures who have dwelt among humans in secret for many years, consuming them for sustenance. A student named Kaneki (who is the main character in both films) is attacked by a ghoul, survives, but is left with the ghoul’s organs implanted in his body. To survive, Kaneki needs to eat human flesh, and is thus brought into the underground world of the ghouls as the manga series ponders who the “real” monster is.

TOKYO GHOUL S is slated for wide release via Shockiku in Japan on July 19.