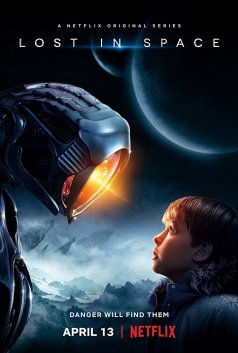 LOST IN SPACE premieres April 13 on Netflix. Based on the classic Irwin Allen TV series from 1965, Netflix’s LOST IN SPACE is a ten-episode science fiction thriller. Netflix’s new series avoids the broad comedy of the original show, treating its premise seriously and with much more intense action and suspense. Like the original series, it also follows the adventures of a family of pioneering space colonists whose spaceship veers dangerously off-course. The new series is not connected to the 1998 feature film starring William Hurt, Mimi Rogers, and Gary Oldman, though that was also based on the 1965 TV series concepts.

The new LOST IN SPACE is written by Matt Sazama and Burk Sharpless and will consist of 10 episodes. The series is produced by Legendary Television, Synthesis Entertainment, and Applebox, with Zack Estrin serving as showrunner.

Christopher Lennertz (SUPERNATURAL, AGENT CARTER, RIDE ALONG) has composed the series score as well as its new title theme; both affectionately integrate elements of John Williams’ music from the classic original TV series.

Together with Legendary Television, Lakeshore Records will release the soundtrack digitally on April 13 to coincide with the release of the new short series.

Watch the trailer for the new LOST IN SPACE here