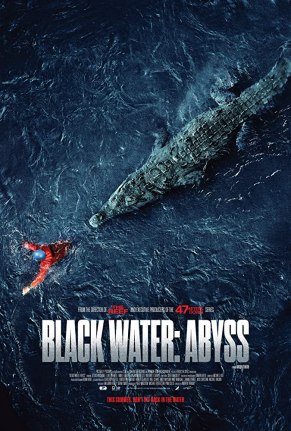 Following up on the 2007 survival horror thriller BLACK WATER, a splendidly terrifying tale of survival in the mangrove swamps of Northern Australia written and directed by David Nerlich and Andrew Traucki, BLACK WATER: ABYSS will be released by Screen Media (a Chicken Soup for the Soul Entertainment company). Traucki (who in the meantime directed on his own THE REEF, THE ABC’S OF DEATH [segment “G Is For Gravity”], and THE JUNGLE) directs from a script by Ian John Ridley and Sarah Smith (hitherto known mostly for their television work).

BLACK WATER: ABYSS stars Jessica McNamee (LOCUSTS, THE MEG, BATTLE OF THE SEXES, CHIPS), Luke Mitchell (TV’s BLINDSPOT, AGENTS OF S.H.I.E.L.D. THE TOMORROW PEOPLE), and Amali Golden (THE INVISIBLE MAN, BLOOM series), and has to do with a group of friends who are exploring a remote cave system deep in the forests of Northern Australia when a tropical storm hits. As rising floodwaters trap them deep below the surface, something even deadlier emerges from the darkness – killer crocodiles.

Australian multi-instrumentalist and composer Michael Lira has scored the film. He is known as a founding member of experimental bands Vicious Hairy Mary, Darth Vegas and gypsy swing ensemble Monsieur Camembert. He has been scoring films, shorts, and television since 2006, and has won numerous Australian Academy of Cinema and Television Arts awards for his music. He is known for scoring the action drama THE HUNTER (2011), the horror comedies VIXEN VELVET’S ZOMBIE MASSACRE (2015), WYRMWOOD: ROAD OF THE DEAD (2014), the dramedy WHEN THE STARLIGHT ENDS (2016), BROKEN GHOST (2017), the post-apocalyptic adventure drama BLUE WORLD ORDER (2017), the supernatural fantasy comedy NEKROTRONIC (2018), as well as the television series RAKE (2010-2018), and BOGAN PRIDE (2006).

BLACK WATER: ABYSS is scheduled for release in theaters and on VOD beginning August 7th.

For more information on the composer, see his web site here.