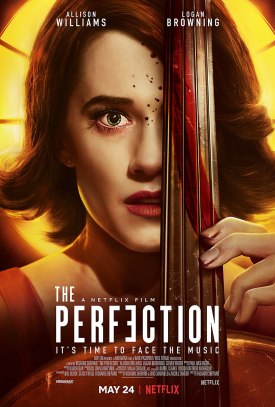 THE PERFECTION is a new American horror thriller film directed by Richard Shepard (THE MATADOR, THE HUNTING PARTY, UGLY BETTY), from a screenplay by Shepard, Nicole Snyder and Eric C. Charmelo. It stars Allison Williams (GET OUT), Logan Browning (POWERS, DEAR WHITE PEOPLE), Steven Weber (THE SHINING [1997], TV’s WINGS, SINGLE WHITE FEMALE), and Alaina Huffman (PAINKILLER JANE, SMALLVILLE). Williams plays a troubled musical prodigy who seeks out the new star pupil of her former school (Browning), but the encounter sends them down a sinister path with wildly shocking consequences.

The film was completed in 2018 and had its world premiere at Fantastic Fest last September. It is now scheduled to be released on May 24, 2019, by Netflix.

Read this enthusiastic review of THE PERFECTION from goseetalk.com, written after its festival premiere.