THE SCORE FINDS YOU

Geoff Zanelli Scores Blumhouse Thriller YOU SHOULD HAVE LEFT 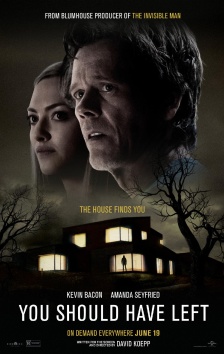 In the new psychological thriller YOU SHOULD HAVE LEFT from Blumhouse Productions and legendary screenwriter David Koepp (JURASSIC PARK, MISSION: IMPOSSIBLE, PANIC ROOM, STIR OF ECHOES), Kevin Bacon and Amanda Seyfried star as a couple seeking a restful vacation on an isolated edge of the world only to discover that secrets demand a reckoning … and travel with you. In this terrifying, mind-twisting tale, a father fights desperately to save his family from a beautiful home that refuses to let them leave.

Based on the novel by best-selling German literary sensation Daniel Kehlmann (Measuring the World), YOU SHOULD HAVE LEFT is written and directed by David Koepp and produced by grandmaster of terror Jason Blum (THE PURGE and HALLOWEEN franchises), Kevin Bacon, and Dean O’Toole (WALK LIKE A PANTHER).

Composer Geoff Zanelli (PIRATES OF THE CARIBBEAN: DEAD MEN TELL NO TALES, INTO THE WEST, MALEFICENT: MISTRESS OF EVIL, BENEATH THE DARKNESS) provides the film’s score.

The movie will be available On Demand from Universal beginning June 19. For more details, see the film’s official site.

Watch the trailer for YOU SHOULD HAVE LEFT: