Hundreds of years from now the last surviving humans have developed the technology to send their consciousnesses back through time, directly into people in the 21st century. These “travelers” assume the lives of seemingly random people, while secretly working as teams to perform missions in order to save humanity from a terrible future. 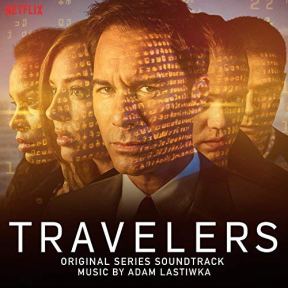 TRAVELERS is a science fiction television series created by Brad Wright, starring Eric McCormack, Mackenzie Porter, Jared Abrahamson, Nesta Cooper, Reilly Dolman and Patrick Gilmore. The series was an international co-production between streaming service Netflix and Canadian specialty channel Showcase for its first two seasons, after which Netflix took over as its sole production company and exclusive worldwide distributor. The show premiered in Canada on October 17, 2016 and worldwide on December 23, 2016. A second season followed in 2017, and its third season is scheduled to premiere on December 14, 2018

The series features a score by Adam Lastiwka, who “tried to extrapolate what music would sound like in the future performed by a homogenized people who, while remaining musical, actually played traditional instruments incorrectly,” as The Annotator website noted in an interview with the composer posted last August. Lakeshore released the full original score from Season 1, digitally, last January (catch up with it on Amazon or iTunes.

For more information on Adam Lastiwka, see the composer’s website.

Two video links below:
Watch an excellent short interview with the composer about scoring TRAVELERS, showing some of the unique instruments used in the score:

Travelers, Season 3 is coming to Netflix, December 14th. Until then, maintain Protocol 5. pic.twitter.com/tmRl5BPA6a