In an interview with Sophie Benamon published on June 28, 2017 in the French magazine Studio Cine Live, BLADE RUNNER 2049 director Denis Villeneuve revealed that Johann Johannsson, with whom he’d previously worked on SICARIO and ARRIVAL and who has been attached as composer to the BLADE RUNNER 2049 since at least August 2016, will be assisted by Hans Zimmer and Benjamin Wallfisch on completing the score for Villeneuve’s sequel to Ridley Scott’s acclaimed 1982 sci-fi noir. 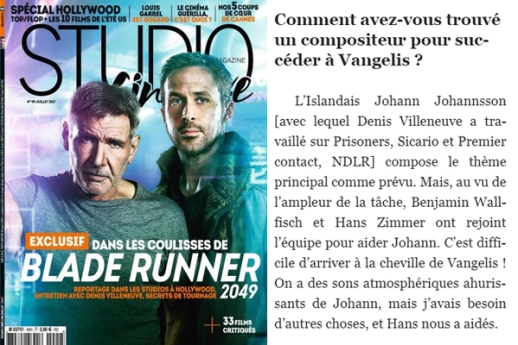 In a translation obtained via google translate, Villeneuve stated, “Icelander Johann Johannsson…  composes the main theme as expected. However, given the scale of the task, Benjamin Wallfisch and Hans Zimmer joined the team to help Johann… We have Johann’s breathtaking atmospheric sounds, but I needed others, and Hans helped us.”

Walfisch, who has been scoring films on his own in England and Hollywood since 2005, became associated with Hans Zimmer in 2013 as an additional music composer on 12 YEARS A SLAVE, THE LITTLE PRINCE, and BATMAN V SUPERMAN: DAWN OF JUSTICE before his co-composer credit on 2016’s HIDDEN FIGURES.

For more details on the BLADE RUNNER 2049 movie, scheduled for release in October, see the movie’s official web site: http://bladerunnermovie.com/