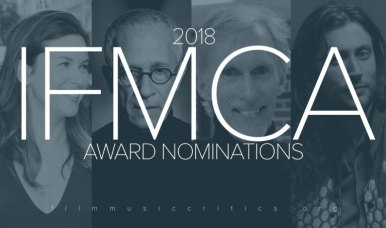 The International Film Music Critics Association (IFMCA) announces its list of nominees for excellence in musical scoring in 2018, for the 15th annual IFMCA Awards. In one of the most open fields in IFMCA history, composer James Newton Howard received the most nominations with four, closely followed by Nicholas Britell, Alexandre Desplat, Ludwig Göransson, Justin Hurwitz, and John Powell, who each received three.

This is a good year for genre film scores being recognized by the IFMCA. The nominees for Best Original Score For A Fantasy/Science Fiction/Horror Film are Ludwig Göransson for BLACK PANTHER, James Newton Howard for FANTASTIC BEASTS: THE CRIMES OF GRINDELWALD, Michael Giacchino for JURASSIC WORLD: FALLEN KINGDOM, Alan Silvestri for READY PLAYER ONE, and John Powell for SOLO.

In addition, a number of genre scores were nominated in other categories as well, including:

Film Score Of The Year

Best Original Score For A Video Game Or Interactive Media

Film Music Composition Of The Year

The International Film Music Critics Association will announce the winners of the 15th IFMCA Awards on February 21, 2019.

The International Film Music Critics Association (IFMCA) is an association of online, print and radio journalists who specialize in writing and broadcasting about original film, television and game music.

Since its inception the IFMCA has grown to comprise over 65 members from countries such as Australia, Belgium, Canada, China, Denmark, France, Germany, Greece, Ireland, Italy, the Netherlands, Norway, Poland, Romania, Spain, Sweden, Switzerland, the United Kingdom, and the United States of America.

Check out the entire list of 2018 IFMCA nominations here.