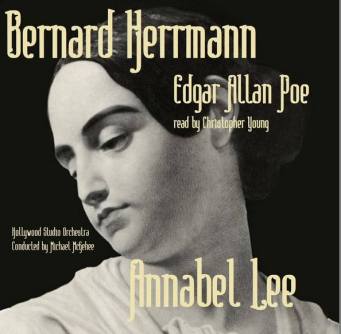 Prior to all his film and radio scores Bernard Herrmann wrote a series of orchestral works he called “Melodrams,” as an accompaniment to poetry readings. The success of these works led directly to his creation of original scores for the new art of radio drama and ultimately to his unparalleled film scoring career over the next four decades. The “Melodrams” have gone unheard and unrecorded for 80 years.

Three of these Melodrams are newly recorded by the Hollywood Studio Orchestra conducted by Michael McGehee with narration by film composer Christopher Young, the dynamic composer of nearly 100 film scores including HELLRAISER, THE SHIPPING NEWS, SWORDFISH, and SPIDER MAN 3. His discovery of Bernard Herrmann led him to focusing on music for films. “Here was someone doing everything I wanted to do. I fell in love with the music before I realized that it was written for movies”, said Young.

Annabel Lee is based upon the poem by Edgar Allan Poe in a perfect paring of poet and composer.

The City of Brass contains music later used in Herrmann’s score to JASON AND THE ARGONAUTS and is based upon a reading from the Arabian Nights.

Cynara by Ernest Dowson serves as the basis for the last Melodram in this first series of releases.

To sample tracks or order the digital albums, see: https://newdiscovery.bandcamp.com/