An Integrated Score for Disintegration 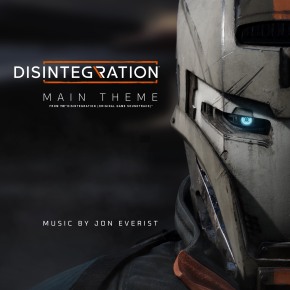 Disintegration’s Audio Lead at V1 Interactive, Jack Menhorn, describes the creative process and collaboration with Everist: “When we started working with Jon, the main theme was the first piece we tackled as it would set the tone and character of the rest of Disintegration’s music. There was so much to get right with this piece: the ‘earworm’ melody that people would remember, the struggle and eventual heroic victory of our characters, as well as the general vibe of the game we were still figuring out ourselves. Jon has nailed each of these criteria masterfully and went on to do the same with all of the music in the game.”

In Disintegration, players will journey to the near future, when humankind is on the brink of extinction and turns to technology in their hope of survival. Through a process known as ‘Integration,’ the human brain is removed and surgically encased into a robotic armature. A domineering enemy superpower known as the Rayonne emerges, driven mad by their newfound supremacy, and begin capturing what remains of humanity forcing them into robotic ‘Integration.’

“I wanted to capture both the fragility and hopefulness of the human spirit,” explains composer Jon Everist. “The solo piano motif propels the piece to a crescendo with the rest of the orchestra where our heroic theme is revealed, representing the power and ingenuity of humanity coming together for a common good. This is the theme of the resistance.”

Menhorn adds, “What I love the most about the main theme, is the story it tells within itself; from a humble, forlorn melody that builds into a tense, dangerous mood of conflict and then rises above to a commanding statement of the main melody. The piece continues with its own ups and downs, returning to the melodies with different states of conflict and hope. This excellently mirrors the narrative and is a testament to how masterfully the music gels with what we the team at V1 Interactive have cooked up.”

Developed by V1 Interactive, an independent studio of 30 industry veterans and new talent, and led by Marcus Lehto, co-creator of Halo and former creative director of Bungie, Disintegration is scheduled for release on June 16 on PC, PlayStation®4, PlayStation®4 Pro and across the Xbox One family of devices, including Xbox One X. Click here to watch the ‘Disintegration Main Theme’ music video.