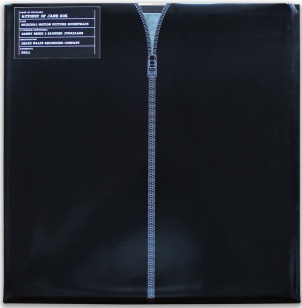 Death Waltz Records, distributed by Mondo, is releasing on vinyl the score by Danny Bensi & Saunder Jurriaans for the 2017 horror thriller THE AUTOPSY OF JANE DOE. The film debuted at Fantastic Fest in 2016 and became a fast favorite of the Death Waltz team. “We are super proud to bring you the score LP just in time for the holiday season!” wrote the label in their announcement. “We fell in love with this film (and score) when we saw it and we just knew we had to release the score to what is one of our favorite horror films of the last 10 years. We asked Jay Shaw to design the packaging and after spending a month or so bouncing ideas off each other we came up with the most fitting (and grotesque) package that we could for the film.” The record is pressed on 180 Gram Clear vinyl with red & blue veins, housed in a triple gatefold sleeve, complete with a body bag.

As usual, new releases go on sale on Wednesdays at NOON (CT) via mondotees.com. For more information, including a queasy look at Jay Shaw’s awesome triple gatefold sleeve accompanied by some of the music, see mondotees/news.

The score is also available via digital download [cover, left] from iTunes/Apple music and Amazon via IM Global Music, and is playing on Spotify, and the film is available on Blu-ray from Shout Factory.

Be sure to watch this creepy soundtrack teaser from Mondo