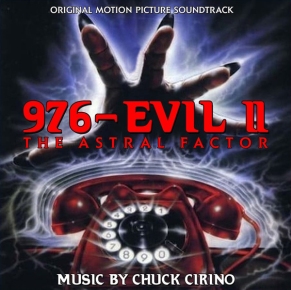 Dragon’s Domain Records, to be distributed through buysoundtrax.com presents the original motion picture soundtrack for 976 EVIL II, featuring music composed by Chuck Cirino for the 1991 sequel to 976-EVIL. This film continues the longtime collaboration between filmmaker Jim Wynorski and composer Chuck Cirino, which includes films such as CHOPPING MALL, DEATHSTALKER II, NOT OF THIS EARTH, TRANSYLVANIA TWIST, A DOGGONE CHRISTMAS, A DOGGONE HOLLYWOOD and, most recently, A DOGGONE ADVENTURE.

976-EVIL II was Chuck Cirino’s tenth film score for Jim Wynorski. The two had met in New York City due to their mutual love for Ennio Morricone, and they reconnected when both wound up in Los Angeles and Jim asked Chuck to score his 1986 movie, CHOPPING MALL. With Cinetel came a larger budget than usual and it was Chuck’s idea, rather than to score the movie wholly with synthesizers, as he had done with all his previous scores, to take advantage of the budget and bring in a small orchestra to enhance his synths. “What I had in mind is emulating what Jerry Goldsmith and Bernard Herrmann had done back in THE TWILIGHT ZONE days, with small orchestras,” Cirino said in a new interview for the liner notes. He was able to craft some highly effective and unique electronic sound structures that enhanced the film’s moments of horror and made some of its more audacious sequences immensely exciting and fun.

Dragon’s Domain Records is excited to bring 976-EVIL II to compact disc for the first time, mastered by James Nelson at Digital Outland with exclusive liner notes by author Randall Larson, with the participation of the composer and the director. 976-EVIL II is a limited edition release of 500 units.

For more information, to sample tracks, or to order, see buysoundtrax

Watch a video suite of the music from 976-EVIL II, created by the composer: