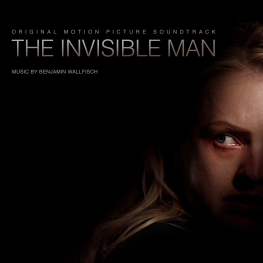 Back Lot Music has digitally released the Original Motion Picture Soundtrack to Universal Pictures’ THE INVISIBLE MAN, a Blumhouse/Goalpost production directed by Leigh Whannell (UPGRADE, INSIDIOUS: CHAPTER 3) from his screenplay and screen story. The film’s original score is by GRAMMY® and Golden Globe-nominated composer Benjamin Wallfisch (BLADE RUNNER 2049, IT). A vinyl release is available through Mondo featuring two 180g discs housed inside a gatefold sleeve and an etching on side 4.

Trapped in a violent, controlling relationship with a wealthy and brilliant scientist, Cecilia Kass (Moss) escapes in the dead of night and disappears into hiding. But when Cecilia’s abusive ex, Adrian Griffin (Oliver Jackson-Cohen, Netflix’s The Haunting of Hill House), commits suicide and leaves her a generous portion of his vast fortune, Cecilia suspects his death was a hoax. As a series of eerie coincidences turn lethal, threatening the lives of those she loves, Cecilia’s sanity begins to unravel as she desperately tries to prove that she is being hunted by someone nobody can see.

Discussing his approach to the film’s score, Wallfisch said, “It was about using silence rhythmically. When there is music, the gestures and sonic attitude are sometimes so left-field and extreme that you almost don’t trust the score’s absence when it’s not there. As a kind of analogue to the presence of Adrian Griffin [the Invisible Man] in the film.”

Wallfisch continued, “Also, the orchestral instrumentation is deliberately constrained to strings- only so that the musicians were pushed to their max, without the support of a full orchestra. That choice was also an homage to one of my heroes, Bernard Herrmann and one of his masterpieces, the Psycho score.”

As the film progresses, Cecilia (Moss) devolves into questioning her every move, then grows into her power. The composer reflected that journey musically as well. “‘Cecilia’s Theme,’ a simple melody for cello and strings, was written to be a musical reminder of her own sanity, as everything unravels around her,” Wallfisch said. “You only hear it a handful of times in the movie, at key turning points in the story. There is also a piano motif that recurs a few times, something building and insistent, meant to portray the way she still manages to hold on to who she really is, against all the odds, ultimately triumphing.”

Because Wallfisch was tasked with creating musical space for an antagonist who is literally not present, the composer had to factor into his choices for Adrian/the Invisible Man some elements that he’d not previously considered for a villain: “Rather than a melodic theme, we needed a signature sound for Adrian—something that just creeps up on you. The sonic for the Invisible Man himself is entirely electronic, and when it goes full tilt, we tried to push things as hard as they could possibly go.”