MUSIC FOR THE HIGH CASTLE

British-born composer Dominic Lewis’ score to the fourth season of the Amazon original alternative universe series’ THE MAN IN THE HIGH CASTLE is out now via Lakeshore Records on all major digital music services.

Lewis is known for his scores to MY SPY, MONEY MONSTER, GOOSEBUMPS: HAUNTED HALLOWEEN, and the Disney Television animated shows DUCK TALES and ROCKETEER; he also contributed additional music to such notable films as KINGSMAN: THE SECRET SERVICE, CAPTAIN AMERICA: THE WINTER SOLDIER, WRECK-IT RALPH and X-MAN: FIRST CLASS. Lewis’s close collaboration with composer Henry Jackman on those films led to the pair scoring Amazon’s THE MAN IN THE HIGH CASTLE. Both Lewis and Jackman co-scored the first season, while the second, third, and fourth were scored by Lewis alone. 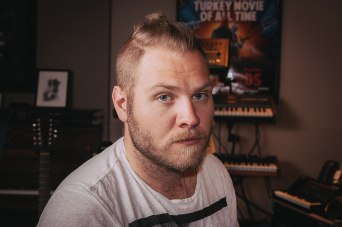 “I think it’s really important that a TV show like THE MAN IN THE HIGH CASTLE doesn’t have wall-to-wall music,” Lewis told interviewer Devon Forward in a 2018 posting at purefandom.com. “One, because the production value is so high, and also the acting is so phenomenal that sometimes when you add music to a serious scene, it actually loses its effect. Often it’s better to play it silent and let the actors do the heavy lifting. But to avoid all of that, before every episode I sit down with the producers and we spot the episode and we go through where it needs music, where it doesn’t, and it’s sort of like just watching it after the editor has put in temp music to say where he or she thinks it should go. We then discuss it and say, well, maybe we need to come out earlier because we’re stepping on the scene, or maybe we need to come in earlier because that needs a little bit of help, and giving the audience what they need to feel, so on and so forth.”

In 2014, Lewis received best score the Annie Award nomination for FREE BIRD; in 2015, he was nominated Discovery of the Year at the World Soundtrack Awards; and in 2018, his PETER RABBIT score received the best score nomination at the Australian Academy of Cinema and Television Arts (AACTA).

Stream all seasons of THE MAN IN THE HIGH CASTLE now on Amazon Prime Video.