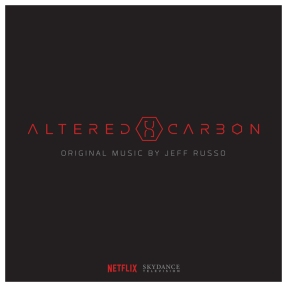 When asked about how he crafted the score for this unique futuristic universe, Russo said, “We wanted to play the emotional undercurrent of the story so we decided not to be too on the nose as far as the sci-fi aspect. In ALTERED CARBON, human bodies are interchangable. So in this story, the idea of playing the core of a person becomes very important. I wanted to make sure to create thematic motifs that could be used to keep track of who was who in the ever-changing landscape of the story.”

Based on the classic cyberpunk noir novel by Richard K. Morgan, ALTERED CARBON is an intriguing story of murder, love, sex, and betrayal, set more than 300 years in the future. In Netflix’s ALTERED CARBON, society has been transformed by new technology: consciousness can be digitized; human bodies are interchangeable; death is no longer permanent. Takeshi Kovacs is the lone surviving soldier in a group of elite interstellar warriors who were defeated in an uprising against the new world order. His mind was imprisoned – on ice – for centuries until Laurens Bancroft, an impossibly wealthy, long-lived man, offers Kovacs the chance to live again. In exchange, Kovacs has to solve a murder … that of Bancroft himself.

“The first scene I scored was when Kovacs is brought back to life,” Russo explained. “It seemed appropriate to first work on the scene in which our main character is reborn into the body he would occupy for the series. That also allowed me to showcase the threading of voices throughout the score that would become its cornerstone sound.”