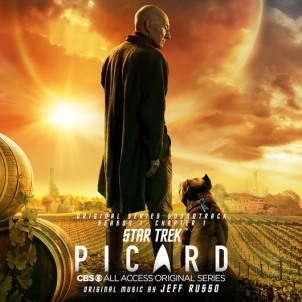 If it wasn’t enough that we see the return of Jean-Luc Picard and other STAR TREK: THE NEXT GENERATION crew favorites, soundtrack fans will also get Jeff Russo’s series score beamed onto your favorite listening devices! Lakeshore Records has the digital original soundtrack album to Star Trek: Picard – Season 1 waiting in the wings.

Composed by Emmy Award-winning Jeff Russo, Lakeshore Records will release the album digitally on February 7 (available for preorder now). For a sampling of the album, Screen Rant has exclusively debuted the track titled “Mystery Ship,” which augments the action with an exhilarating, driving orchestral score—which is now posted to youtube (see below).

For more information on the composer, see Randall Larson’s interview with Russo on the November Soundtrax column.