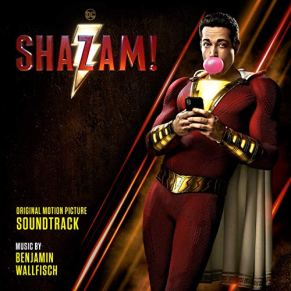 WaterTower Music will release the official soundtrack album for the comic book movie SHAZAM! The album features the film’s original music composed by Benjamin Wallfisch (IT, BLADE RUNNER 2049, HIDDEN FIGURES, HELLBOY). The digital album will be released this Friday, April 5, 2019 (same date the film opens, via Warner Bros.) and can be pre-ordered now from Amazon.

SHAZAM! director David F. Sandberg (LIGHTS OUT, ANNABELLE: CREATION) spoke about working with Wallfisch on the film’s music. “Ben is the only composer I’ve worked with so far, and the guy is amazing,” explains the director.  “Something we talked about is that I wanted it to feel very much like a classic superhero score, because Shazam is a Golden Age Super Hero, and I wanted to honor that history.”

“It’s always such an incredible joy collaborating with David,” explained Wallfisch. “Not only is he a visionary filmmaker, he’s also a great musician. We both have a shared love of the classic superhero, fantasy and adventure scores of the `80s, and we started the SHAZAM! score by trying to channel the feeling of wonder and hope that incredible music gives you. It felt like being a kid again; I grew up in the `80s in total awe of, and in love with, that music.”

A CD release of the SHAZAM! score will be issued by WaterTower Music on May 10 via Amazon and Amazon UK.