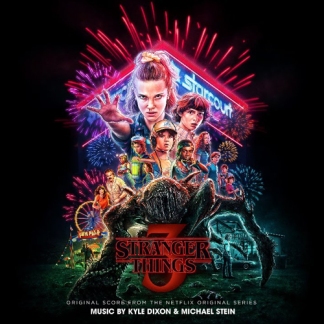 The long-awaited third season of Netflix’s science fiction series STRANGER THINGS is set to premieres on July 4. A new, final trailer for the new season has been posted yesterday to youtube (see below to watch).

Lakeshore Records will release the soundtrack album STRANGER THINGS Season 3, featuring music from the original score composed by Kyle Dixon & Michael Stein, half of the electronic band Survive. The soundtrack will be released digitally on June 28, with both CD and vinyl versions to follow.

Lakeshore has posted the track, “The Ceiling is Beautiful,” from the Season 3 score album:

In a statement, composers/musicians Dixon and Stein stated: “With the Season 3 soundtrack, we’ve made an album that doesn’t feel like a ‘score’ necessarily, but one that feels more like a stand-alone record than a collection of brief cues. “We’ve incorporated the main narrative elements of the series and stayed true to the original sound while at the same time expanding on our musical palette—we often pushed it to the limit. We’ve really made an effort to curate this album to showcase the moments we think are really special.”

In addition to the score album, Legacy Recordings will release a Season 3 songtrack album compiling 15 classic pop tracks from the ’80s, associated with the show’s third season, on digital, CD, and cassette editions; a 12” vinyl edition of Legacy’s release is set to follow on July 26.