What Music it Makes

Varèse Sarabande is celebrating its 40th Anniversary with a Deluxe Edition of its most requested soundtrack. Years in the making, countless hurdles overcome: an extended, 2-CD deluxe edition of John Williams’ score for John Badham’s 1979 DRACULA – the latest edition of the label’s limited edition CD Club. 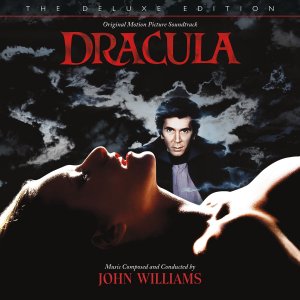 “John Williams was absolutely on fire at this time,” writes the label in its announcement of the release. “There were STAR WARS and CLOSE ENCOUNTERS OF THE THIRD KIND in 1977. THE FURY, JAWS 2, and SUPERMAN all from 1978. And then came DRACULA in 1979. It was a magical time and this was another masterpiece. DRACULA features one of John Williams’ most brilliant and iconic themes, which captured the mythical Count in a darkly romantic and seductive way.”

For this Deluxe Edition, the label has expanded the original 36:00 album selection to a whopping 72:00, including cues not heard in the final cut of the picture. Mike Matessino undertook the new 2018 mix of the score. Due to its own unique assembly, which represents John Williams’ own album vision from 1979, we have included a newly-mastered-from-a-new-source presentation of the originally soundtrack album on the second disc.

Throughout history, Dracula has filled men’s hearts with fear – and women’s hearts with desire. In this stylish retelling of the classic tale of horror, Frank Langella gives an electrifying performance as the bloodthirsty Count, with Sir Laurence Olivier as his legendary nemesis, Van Helsing, the renowned and relentless vampire hunter seeking to end the Dark Prince’s reign of terror over the citizens of Transylvania.

This release is a limited edition of 5000 copies.

For more information, view tracklist, sample some of the tracks, or to order, see varesesarabande