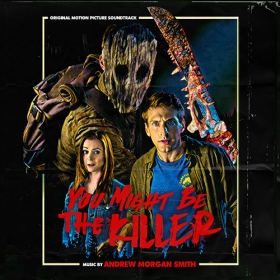 Screamworks Records re-teams with JEEPERS CREEPERS 3 composer Andrew Morgan Smith to present his new score for YOU MIGHT BE THE KILLER, starring genre veterans Fran Kranz (THE CABIN IN THE WOODS) and Alyson Hannigan (BUFFY THE VAMPIRE SLAYER). When Sam (Kranz), the camp counselor suffering from blackouts finds himself surrounded by murder victims, he gets an uneasy feeling about the murders. When he turns to his horror movie enthusiast friend Chuck (Hannigan) for advice, the two of them figure out the only logical solution – what if Sam is the killer and he might strike again? Who will stop him – and does he need stopping at all?

Smith’s score for Brett Simmons’ love letter to 1980s slasher movies has already received critical acclaim in genre movie reviews, which notes that this score pays tribute to the orchestral scores rather than the synth scores from that same era. Film music buffs will enjoy Smith’s nod to Alan Silvestri in his score, which is the label’s second release on Screamworks Records with this composer.

“YOU MIGHT BE THE KILLER was a tremendously fun movie to work on,” says Andrew Morgan Smith about the project. “When I first met with the director, Brett, he was very interested in classic ‘80s orchestral scores. This was really exciting for me. Since the whole movie is a send up of classic slasher/horror movies, we needed a score that would do the same thing. With this in mind, I delved into that style and wrote a horror score that paid homage to these old movies and help it really nail that time period/genre. It’s not often you get to play in the Jerry Goldsmith, Alan Silvestri, and Christopher Young sandbox, but YOU MIGHT BE THE KILLER allowed me to do that.“ With its cheeky references to the decade of slashers, this might be a camp classic – pun fully intended.

For more details, to sample the music, or to order the digital soundtrack, see moviescoremedia