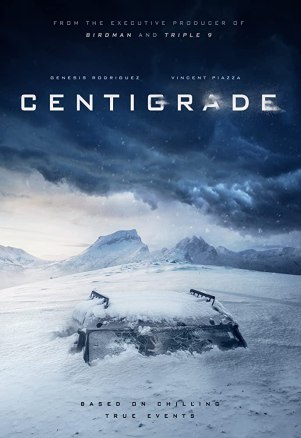 In the new claustro-thriller CENTIGRADE, a man and his pregnant wife become trapped in their car when a storm buries them underneath layers of snow and ice. As supplies dwindle and temperatures plunge, the couple must battle the elements and hypothermia in a desperate fight for survival.

Directed by Brendan Walsh (NURSE JACKIE, BRILLIANT IDIOT) and co-written by Walsh and Daley Nixon, the film stars Genesis Rodriguez (HOURS, TUSK, BIG HERO 6, MAN ON A LEDGE), Vincent Piazza (BOARDWALK EMPIRE, JERSEY BOYS, THE WANNABE), and Mavis Simpson-Ernst (YES, THE AMERICANS, THE LAST O.G., BROAD CITY). The fim is based on an actual 2002 incident when a young American couple traveled to the arctic mountains of Norway; after pulling over during a snowstorm, they wake up trapped in their SUV, buried underneath layers of snow and ice.

Trey Toy is a Los Angeles-based composer, producer, guitarist, and electronic musician. He is known primarily for his work in film and television and has contributed music to a wide range of projects. Trey collaborates frequently with Emmy Award-winning composer Trevor Morris, working as a writer and co-producer on the scores for hit television shows. Matthew Wang is an Asian American film and television composer who blends natural organic soundscapes with live instruments and electronic textures, creating atmospheres unique to each project. Born and raised in New York City, Matthew graduated from the NYU Tisch Clive Davis Institute of Recorded Music in 2018.

The film is scheduled to open August 20 via IFC Midnight.